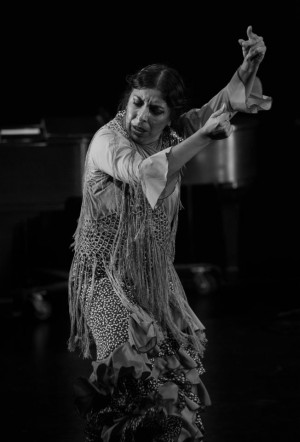 Flamenco dancer/choreographer, vocalist and master teacher, Briseyda Zárate, directs her own company and has performed through out the USA and Spain with noted Gypsy and Spanish artists. Flamenco is her her life’s passion and work.

US career highlights include choreographer and consultant for screen content for Madonna’s Rebel Heart World Tour, “La Isla Bonita” . . Choreographer for the LA Opera’s production of “Carmen” directed by Placido Domingo. Singer and dancer at Disneyland California Adventure with the band Ist-West. And The Festival Flamenco Internacional de Alburquerque’s “IV Concurso Naciónal de Flamenco” in which she placed first. While living in Spain she performed regularly at the renown “El Café de Chinitas” in Madrid, “T de Triana” in Sevilla, and in Jerez de la Frontera at the “Peña los Cernicalos” and in the 2010 edition of “El Festival de Jerez” under the direction of Javier La Torre.

In her beloved Los Angeles, she has been a longstanding performer and artistic director for the critically acclaimed “Forever Flamenco” and the historic EL CID. Her company inaugurated the first annual “Los Angeles International Flamenco Festival” sharing the bill with La Tania and Omayra Amaya. She is featured in the award winning documentary “Kumpania” by Katina Dunn. Briseyda is also a sought out vocalist with and has sang in inumerable nightclubs. She has recorded vocals for albums and movie soundtracks.